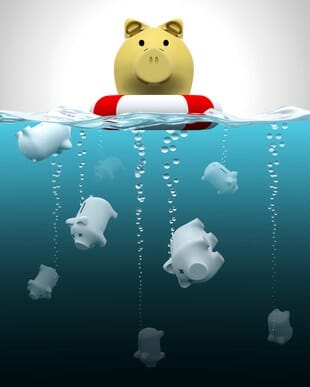 Today stores are ramping up the offers to get you through the doors. They do this by offering ridiculously marked down deals. It’s not uncommon to see things 75% off at prices even the most frugal would jump at but remember this helpful tip: It’s not a deal if you didn’t need it. Once you identify the difference between need and want (you don’t need a leather coat, you want it, you can make do with the non-leather jacket you have now) then you’ll realise you didn’t need that new widget that’s now 50% off.

The holidays are the biggest shopping days in the year as people are often away from work and vendors are usually not afraid to market heavily around these periods.

At the moment Marks and Spencer’s are offering 50 percent reductions on cashmere sweaters, while the Gap had women’s corduroy pants for as little as £19.99 and Amazon sold a 15-inch LCD TV with DVD Player for £499.99.

As nice of a deal as a 15″ LCD TV with a built in DVD player sounds (it’s pretty good), if you didn’t need it then you probably should save that £500 for something down the road.

On relatively inexpensive things, it’s often times good enough to get a decent deal rather than hold out for the absolute best deal ever.

Every once in a long while, usually around large sporting events or during the hot summer months, my local Asda has a great deal of five 12-packs of drink for ten pounds. At £2 a pack, this brings the price per can down to less than 17 pence apiece. This is compared to a regular price of £3.99 a 12-pack (I think, but I can’t be certain because I’ve never purchased it at full price before) which turns that seventeen pence piece of caffeinated heaven into a nearly 34 pence David Bach-worthy indulgence (okay, there was a bit of hyperbole involved there but you catch my drift). Those five for £10 deals aren’t very frequent and oftentimes Asda throws its customers a bone and offers the 12-packs at three for £10 or sometimes four for £10. At those prices, the unit cost of a can is only slightly lower but don’t carry the stigma of full price.

My strategy for weathering the droughts between good soda deals was to not purchase soda at all. It’s arguably better health-wise to skip the soda (one of my friends doesn’t drink soda on the advice of his dentist because the acidity damages your enamel if you let it linger) so I often go for more coffee when it’s cooler or plain water when it’s hotter. However, every so often I’ll crave a soda and then drop £1.29 for one of the large plastic bottles. The end result is that it’s either feast or famine… I either get the deal and buy cans at seventeen pence or a bottle at over seven times the price (ignore the fact that I get a larger one because it’s not really relevant for the purposes of this discussion).

So lately I’ve been following my own maxim of getting a decent deal in the absence of the best deal. The five for £10 isn’t always available, but the 3 for £10 and the 4 for £10 is usually available and I pick up one to hold me over. By spending a little more, I prevent myself from going all the way over to the other extreme and get more value for my dollar in the long run.

I bet you work hard for the pounds in your wallet, I know I do. You don’t spend hours away from your family or your favourite pursuits because you like work more than them, you do it because works pays you money so that you can support yourself and yours and do the things you want to do with your free time. I’m the same way. That’s why whenever I do the paying, I make sure I get the most out of the purchase. I believe there is always a deal to be made and those deals have saved me many hours of work in the process.

I believe that whenever you make a purchase of any kind, there is always a deal to be made or found.

Why Look for a Deal?

I think part of the reason is my upbringing. My parents were frugal because they valued being able to fly us all home to Taiwan, from London, as often as possible to visit our family there. Airfare for a family of four to the other side of the globe is very expensive. We found deals because without a deal, we couldn’t afford to do many of the other things we valued more.

A big reason is saving. Neil Griffiths who is an online money lender for sites like SimplePayday says;

“As my job is lending people money, the last thing I want to do is waste money. Call it a superstition, but I am always worried about finding myself in the same position as my clients. Needing to borrow money for small things like bills. So, I save, save and save.”

Another reason I look for deals is because it validates how badly I want something. Let’s say it’s a piece of electronic equipment. I will do hours of research to make sure I get the best product for the best price from the most reputable dealer. If I’m not willing to do the work, how badly do I want it? If I don’t want it that badly, then I shouldn’t be buying it in the first place.

Finally, it’s a challenge! RRP stands for recommended retail price. When I see RRP I smile because in that number I see a challenge. There is always a sale, always a coupon, always a vendor willing to sell it for less… there is always a deal out there and the fun is in finding it. Maybe you find a £10 off £100 coupon, couple it with a rebate and find some pencils to get you over the $100 hump. Maybe you find a manufacturer’s rebate and a vendor rebate to get it to you for free. Maybe you find a rebranded version that is identical except for the logo… there are so many possibilities!

Turn Deal Hunting into A Game

Deal hunting on the internet is a lot easier than deal hunting in person. The art of negotiation is invaluable whenever you are dealing with a person face to face. If you don’t think this happens often, think again. While you might not negotiate with a retail assistant at a store very often, you do whenever you get someone to give you a quote for work on your house or car.

The one lesson you have to learn, above any other negotiation lesson is that there is always a deal. Always. Whether it’s through a coupon or through negotiation, the list price is just where the game starts. Read the rules of what makes Indians successful negotiators and try to remember them. This is my favourite – “Try for 70% off — Don’t accept less than 30%.” What is more awkward, overpaying or negotiating a little?

The economic malaise has probably had an effect on your life, I know it has had one on mine. However, as bad as you think your personal prospects are, it’s worse for companies that have to make payroll, rent, and debt obligations. At the end of the day, you have to take care of you and your own, which is why I recommend that you periodically shop around and use that information to strong arm your way to a better deal on the services you already buy.

Don’t feel badly about using your most powerful a weapon, the power of choice, to negotiate a better deal. When you pay £60 or £80 or £100 a month for your mobile phone, you’re not getting £60 or £80 or £100 worth of service. You’re getting something the company is selling to someone else for £30 a month. They will charge whatever the market will bear and it’s up to you, the consumer, to push back and tell them that their price is too high. At the end of the day, they would rather you spend £5 a month than quit and spend £0.

How to Strong Arm Your Way to a Better Deal

My friends and I go through this ritual every single year with Sky television. The best deals usually only last 6-12 months before the promotional period expires. Every year, we would call Sky, pull out a flyer from DirecTV or Virgin, and try to argue a better rate. My friends in Edinburgh had a little more trouble than me in the suburbs because Sky has a virtual stranglehold on cable television. Sky’s only competitors for television were satellite providers like DirecTV. Fortunately, the best DirecTV deals are very competitive with Sky’s offers so they were still able to strong arm a better deal.

You can also purchase a TV antenna and skip the cable bill.

You can do this with mobile phone service, internet service, almost anything where there are good substitutes and a low marginal cost. Marginal cost refers to how much it costs to actually offer you the service. With mobile phones, the marginal cost is very small because the phone towers are already constructed and in use. It’s simply a matter of giving you a handset and the right to add traffic to the line. With cable television, it’s even lower because the infrastructure is in place – you simply have to plug into it. Home security systems like ADT? Same thing, adding another customer might add some load to the system but they certainly make way more money on the subscriber fees.

So, what are you waiting for, you’ve got some phone calls to make and some balls to break if you want to stop overstretching yourself every month and actually save some of your income!