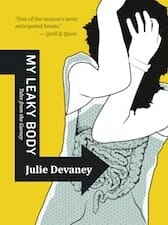 You’ll probably do the same tomorrow because you’re really not feeling well at all. Your head is plugged, your body aches, and your stomach is doing loop-de-loops. Yeah, you’re probably coming down with something because everyone else is, too.

But what if your illness got bad – really bad – and nobody would listen?  In the new book “My Leaky Body” by Julie Devaney, a journey on a gurney takes a nasty turn.

She and her partner, Blair, had recently moved to Vancouver with friends and various pets, Devaney was starting grad school, Blair was job-searching, and money was tight. So when Devaney began having intestinal problems, she figured it would go away when life settled down.

But the pain escalated and Devaney ended up in the ER. There, she laid on a gurney in a closet because the hospital was understaffed and there were no available rooms. Hours later, with medication in her veins and dietary instructions in her hands, she was sent home to rest.

The pain and cramping got worse, to the point that Devaney could barely function. She eventually lost her research job at the university and, discouraged, she and Blair went back to Toronto . Her bank account was depleted. Her insurance ran out. She continued to seek medical help for bleeding, diarrhea, and pain, becoming anemic and weak, enduring dozens of scopes, pokes, sticks, and prods – often without anesthesia because doctors told her it “shouldn’t hurt.”  She became depressed and isolated.

Finally, Devaney found a sympathetic, gentle Toronto doctor who diagnosed ulcerative colitis or Crohn’s disease, but they weren’t sure which she had. There were more scopes. More surgeries, including an ileostomy. More pain.

But then – a breakthrough, both physically and emotionally: “I start to see,” says Devaney, “… that out of all of this horror and pain, something good… some kind of adventure is emerging.”

Today, author Julie Devaney is married and works as a writer and patient-expert on behalf of disability rights and health care delivery. She also performs in a show called My Leaky Body, and she offers educational workshops for medical personnel. That, and her experiences, gives her a lot to say about the state of the health care system, both in Canada and in the States. What she has to say ain’t pretty.

In this book, Devaney shares her five-year-long story truthfully and bluntly, although she does give pseudonyms to doctors who were her worst offenders. That truth is sobering, scary and very hard to read, and it’s also – given the controversy that’s making news – hard to avoid getting angry and joining in her activism.

There’s one big warning about this book, though: it’s very graphic.

Devaney describes bodily functions and fluids with an ease that weak-stomached readers might not want to see, so keep that in mind – you’ve been warned! – before you grab this very thought-provoking book. If you’re concerned about the state of health-care, you should read it.

Just not with lunch.