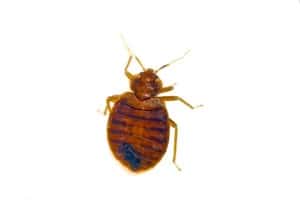 Swat away everything you think you know about bed bugs. The jig is up, as studies everywhere suggest these intolerable insects have checked into more than just your bed. Their most recent target was the state Department of Financial Services (DFS) in lower Manhattan, according to NY Daily News, reporting on two employees who claimed being bitten right at their desk—one of whom had the welts to prove it.

Since the Department’s spokesperson argued there was no evidence of an infestation, two things are for sure: they are sneaky little buggers, and it’s time for a briefing. Here are just a few of the things these mini monsters don’t want you to know.

They Watch You Sleep

Bed bugs are nocturnal parasites with an affinity for blood, which adds just an auburn sheen to their millimetric stature. Unlike mosquitos, they’re flightless. Unlike houseflies, they live for almost a year. And unlike vampires, they’re real. The randomness of their presence, however, has sucked us dry of any big changes to our daily hygiene.

They Make Their Move While You Rest

Call the doctor, because WebMD knows prey when it sees it. These flat, oval-shaped pests compensate for their lack of wings by traveling quickly and easily into hard-to-reach places where, incidentally, we sit and lay still for long periods of time. Though not the nesting type, female bed bugs find the convenience there to lay hundreds of eggs during their lifetime. What’s Thanksgiving without a large immobile meal for the entire family?

They Leave a Mark

According to the Scientific American, any of the following signs/symptoms could mean you were feasted upon:

Blood on your pillow? This could be another sign: bed bugs can get sloppy while turning you into a midnight snack.

They’re Not Picky About Real Estate

It’s important to debug the misleading name—bed bugs don’t just dwell in your mattress. Whether it’s a seat cushion, the back seat of your car, a table or cracks in the floor, they go where the flesh goes—and can live for months, growing and shedding until you return to that spot to quench their thirst.

While insecticide is obviously anyone’s weapon of choice, you’ll probably find that they are tough to treat on your own. You could go through multiple cans of the stuff before your place is critter-free. If you happen to come across bed bugs and see them in action, rubbing alcohol can kill them on the spot. If you found a family of bed bugs, chances are there are many more nearby, so consider calling in a specialist to make sure they are properly treated.