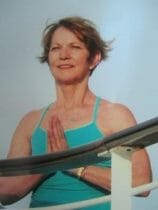 I was 56 years old and I found that I fit the statistic of the average age of widowhood. I felt too young to be a widow and as my practice improved I knew that the door to a happy life could swing open. Yoga helped me see that the possibility of a healthy and full life was ahead of me and that there were no limits to my flexibility. Because each posture addresses so much of the “inner mind”, my adjustment to this new chapter was enhanced by a positive focus and a consistent practice. After a few months of reflection, I decided to participate in my yoga teacher’s first Yoga Teacher Training along with sixty other yogis from around the world.

I enrolled for five weeks of intense training, six days a week from 7am until 9pm or later. I did it…I completed my training and while I was not convinced that I would be teaching, I wanted to share my knowledge. With a body that was more toned than ever, I began sharing the message wherever I traveled. “Yoga can change your life!” became my theme song. With meditation and concentration, I sent a message out to the universe that I wanted more than ever to “participate” in this new life; explore my new freedom and challenge my fears.

The following year I attended yoga retreats in Brazil, North Carolina and Costa Rica and later Santorini, Greece. I took advanced yoga training and began to teach privately and as a substitute at my regular studio. I attended yoga conferences in Canada and Arizona and I supplemented my yoga training by visiting yoga studios across the US. I was asked to teach at a Day School in Miami Beach and in preparation for that assignment I attended training for Kids Yoga in Italy along with 20 others.

I was the only American! My recent travels took me to Southeast Asia and the Caribbean where I shared my daily practice in hotels and resorts with other tourists and locals. Along with the yoga exploration I began sailing….I wanted to experience the taste of the sea and the mystery of its lure. After assorted sailing classes and day sails with a sailing club, I participated in my first ocean passage with 55 other
sailboats from Virginia to the British Virgin Islands. Yes, I meditated and I relied on my Yoga to get through a major storm under very challenging circumstances for ten days on a 55 foot Schooner.

Each day of the voyage I contemplated my position in the scheme of life…Peeling away at my personal layers of protection; I entered a place where fear and the unknown hold hands. It was a scary time. As the height of the waves increased and the speed of the wind mounted, my mind began to let go. I realized that my contribution to the globe was not as significant as my contribution to the three other members of the crew on the sailboat.

Being present, being alert and aware of the moment to moment traverse across the body of water that seemed endless, was my focus. Taking care of the direction of my thoughts and my energy helped my crew and helped me to find a peaceful presence. There is a wonderful sense of freedom in the middle of the ocean. It is that exhilarating feeling of “anything can happen here” sense that draws the soul. Knowing how to ride the wave of anticipation and fear; adventure and the unknown take their place in your heart center and fill you up.

What a sense of accomplishment when you finally reach land! There is just no feeling that can measure up to that first leap from the boat to the dock! And once I hit the dock, I began to teach yoga on the beaches of the British Virgin Islands. With the crew members of over 50 yachts on the initial ocean passage, there were plenty of sailors ready to stretch out there bodies and feel the power of yoga under the intense sun and cloudless blue sky of the Caribbean. What a journey! And yoga has been a full passport to the adventures of life. While the loss of a loved one, and in my case my marriage partner, can and will leave one in a state of confusion, Yoga has opened the window to a new beginning. It works.

When I lost my office addition, from a recent hurricane, because of flooding from a broken water line as the result of a fallen tree, I turned the space outside into a meditation and butterfly garden and the space inside became a yoga studio. I use my studio as a place of meditation and personal practice. I have collected all my favorite yoga books and memorabilia from my retreats in that space. I know that when one door closes, another opens. I have survived great loss and received great reward…the yin and yang of life. When I complete a practice with my students I always leave them with an affirmation. My favorite is…No matter how dark the path, it always leads to light.

Melanie Camp lives in Fort Lauderdale, Florida where she is a community activist and civic leader. She has served on numerous arts boards and been involved in fundraising for worthy causes for over three decades. She has her own publishing company. She consults for authors and edits manuscripts for submission to publishing houses. Melanie also prepares marketing plans for authors. She is a certified yoga instructor and “KidsYoga” associate teacher. Melanie is writing a book of yoga tips and affirmations from her travels around the world. Go to www.artfulyoga.com for a preview of Melanie’s book and an example of her art.

Exercises You Can Do While Wearing a Catheter

Ways To Encourage a Sedentary Child To Exercise

Interesting Benefits Of Playing Football As An Adult