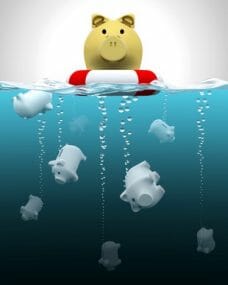 Consumers bemoan insurance planning and shopping. It’s confusing, and budgets are seemingly not roomy enough for additional insurance expenses. Paying for insurance feels like an unfair exchange, and what you’re paying for can’t immediately be enjoyed or valued. Years of paying more than a thousand dollars for auto insurance annually without a single car knick can feel like a waste. Preparing for the long-term, unforeseeable future by paying for life or long-term care insurance can feel like a monetary nuisance.

Consumers acknowledge the value of protecting possible future financial loss with insurance. Often the feeling of risk-free invincibility and financial burden trumps the reason of responsible rationality. Risk plays an integral role in this insurance-buying process. People who perceive themselves as low-risk for sustaining a major injury, accident or illness will rationalize having poor or no insurance. This person takes a huge risk by forgoing coverage altogether to avoid paying for high premiums. As an insurance agent, the challenge is to convince a consumer that following an emotional “feeling” over factual “thinking” can result in monumental financial loss.

“Perceptions of risk are an inextricable blend of fact and feeling, reason and gut reaction, cognition and intuition,” explains David Ropeik, an international consultant in risk perception and communication. Ropeik shares with Nature.com’s Soapbox Science that interpretation of facts related to risk are highly subjective, which can ultimately have perilous effects. Because of a personal and emotional subjectiveness, an individual may worry less about a major threat (having an injury without insurance) and worry more about deferring other, perhaps more immediate, fears (paying for insurance on a tight budget).

One mistake consumers make while buying insurance is assuming insurance is out of their reach, according to U.S. News. The U.S. Census Bureau reports that in 2012, 48 million Americans didn’t have insurance. LIMRA also reported that nearly 30 percent of U.S. households didn’t have life insurance. Bearing the cost of insurance can be too stressful for consumers to opt in. However, the 2013 Insurance Barometer Study discovered that the average consumer thinks life insurance is three times more costly than its actual price. A consumer’s aversion to expensive insurance is evidence of The Perception Gap, which is what Ropeik calls the risky gap between fear and fact. A consumer’s fear of intimidating insurance costs overwhelms the fact that coverage can be a life-saver.

Ropeik refers to Neuroscience by Joseph LeDoux to emphasize how humans respond to risky stimuli instinctively, rather than cognitively. Because of the brain’s chemistry, feelings come into play significantly during the perception and response to “danger” — in other words, feelings preside over thinking.

If emotion drives a consumer to be uncertain about insurance or skeptical about a policy, their emotionally driven false perception of not being covered is highly risky and precarious. The job of an insurance agent is to provide facts that overrule feelings of financial uncertainty and fear. For example, consumers may mistakenly wait too long to buy life insurance. The sooner the better, recommends SmartAsset.com. Premiums increase as people get older, even if you’re in relatively good health. Explain that developing a serious illness or disease could actually generate higher premiums or denied coverage altogether.

Insurance can also help alleviate lawsuit damages. QuoteWizard, an insurance leads company, explains that if you’re being sued and lose, your insurance will cover damages awarded up to the liability limit established in the policy. Identify the needs of your client and offer various types of protection for possible financial risks. Insurance is designed to mitigate the risk of financial loss — and without insurance, the threat of financial loss is steep — a risk no one should gamble in order to save a few bucks.