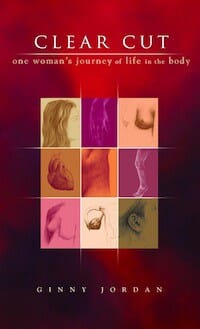 There was no room in your lungs for air.

Falls will do that to you, you know.  First, there’s the split-second, horrible knowledge that you won’t remain upright for much longer, followed by the spill that takes months but happens in a split-second. When it’s over, you’re left flat with your dignity dubious, looking for a scrap of air for your lungs and hoping you’re still intact.

And then there’s falling ill, which is much worse. When that happens, it sometimes feels like you’ll never stop descending, and in the book “Clear Cut” by Ginny Jordan, you’ll see how that leaves one gasping, too.

Ginny Jordan grew up in a rough-and-tumble Ohio family with four brothers. She became a psychotherapist, moved with her husband to Colorado, bore three children, and loved to travel. She was a self-sufficient, independent, adventuresome soul.

And then she began a long trek through unimaginable fatigue.

The fatigue got worse, forcing her family to organize around “Sick Mommy.” Jordan was diagnosed with Méniére’s disease, just like her mother and grandmother, left without the strength to move her head, “not even an inch.”  Then the attacks got worse, causing her to drop flat to the floor.

In the midst of dealing with this, she accidentally felt a lump in her right breast. Her oldest child was nine; her youngest, two.

Jordan said goodbye to her breast after the mastectomy, then cut her hair, knowing that she’d have to say goodbye to that, too. Her oldest daughter said, “in no uncertain terms that she never wants to see me bald…”  Wigs itched. Jordan reluctantly learned to balance a scarf on her head.

Slowly, then, everything went back to as normal as it could get for a one-time cancer patient. Jordan traveled the world, her children grew up, she worked, and she learned to navigate life again.

And then, seventeen years after her first surgery and following a routine mammogram, she got the letter: “Please call to schedule a needle biopsy.” Not long afterward, following her second mastectomy, she lost her ovaries.

Then she lost her hearing.

For most of her life, Jordan claimed she was unafraid of the “broken parts of other people.”  But, she says, “I will always miss my first landscape.”

There’s no denying that author Ginny Jordan writes with beautiful candor mixed with poetry. She never candy-coats the travails she’s endured in trying to outlast cancer and various other life-altering afflictions. Her words are raw, and you want to hold her hand as you read them.

But while I appreciated Jordan’s spirituality, her story became way too new-agey for me. Over and over, she recounts dreams and memories from which she derived messages and other omens. That, and the oft-confusing lack of linearity greatly tampered my enthusiasm for this memoir.

Cancer survivors may be the best audience for this book, but keep in mind that it’s underlain with cobblestones. If you keep aware of that, then try “Clear Cut.”

You may fall under its spell after all.